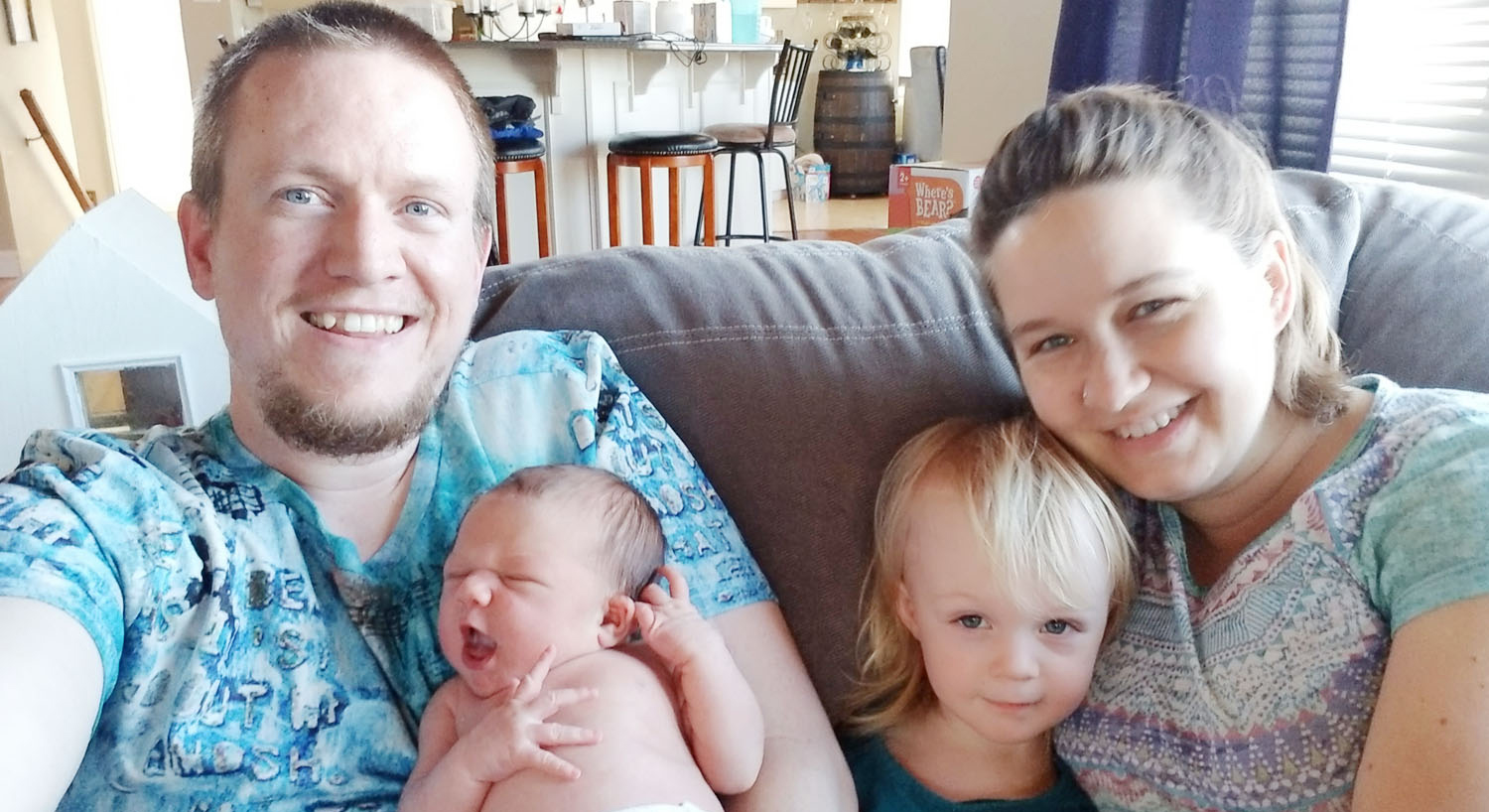 -by Rankin MacDonald
The birth of this couple’s second child will be a story told within the family for generations to come.
Nicolle and Isaac Fraser were excited at the prospect of having a second child to join their two-year-old daughter, Elise; and with Nicolle at 39 weeks, the arrival was just around the birth corridor.

They were in bed on Wednesday night of last week when at 1:00 a.m. on Thursday morning, Nicolle announced that her water had broken.
“Now, that woke me up and I jumped up to call the IWK to tell them we were on our way,” Isaac told The Oran on Easter Monday.
“We weren’t terribly surprised because Nicolle was due on the 20th,” he added.
The IWK told them to come, but that there was no reason to hurry.
The Frasers, who originally came from Strathlorne, Inverness County, lived in Head of St. Margaret’s Bay about 25 minutes from the IWK and by 20 minutes to two they were out the door and into the car ready for the short trip to the hospital.
“The only problem was that Nicolle’s contractions were continual, non-stop, so we were anxious to get to the hospital,” added Isaac.
“Five minutes up the road she grabbed my arm and said we had to pull over,” Isaac recalled.
As luck would have it, they were at the EHS depot in Tantalon and it was here where they decided to pull in.
Isaac ran up to the building, which was in darkness and banged on the door.
He looked in the building and there was no ambulance.
“No help here,” Isaac thought.
He called 911 and told his story.
“I told all,” he said. “Come for us!”
He was told that he would probably have to start the birth himself and was told what to look for as Nicolle’s contractions increased.
“I could see the baby’s head and they told me they were going to walk me through this,” he said. “They said not to let the baby come out too fast.”
“She wasn’t pushing, but the baby wanted to come and as the contractions got faster and faster she really had to push,” said Isaac.
He said with two or three pushes the head was visible, with two more the shoulders and body came out and then there was a baby in his hands, which he was trying to check to see that everything was alright.
“A few seconds later, the baby cried and that was a big relief,” he added.
He checked and the cord was around the belly, he rubbed the baby and placed it in Nicolle’s robe on her chest.
EHS told him to tie off the cord but he had nothing in the car that he could use.
They asked if he had shoelaces, he did and with the lace out of his left shoe, six inches from the belly button, he tied off the cord just as they directed him to and all was well.
“What a thrill,” Isaac said.
Then they realized they didn’t know if it was a boy or a girl.
They checked and Brenna Elaine Fraser joined the family.
Within 10 minutes, two ambulances and four paramedics arrived on the scene.
They pointed out that the hard part was done and the baby could be transported with ease to the IWK.
“I was scared, but what a thrill to help deliver your own baby,” he said. “It happened so quick there was really no time to be nervous.”
He pointed out that he had all the emergency training from working in the oil and gas sector, even offshore, so he knew how to handle an emergency.
“Having that training is so important,” he said.
They did it together, as a family, and are proud of how they handled a situation that would send most people into a faint.
The family is just fine and has one heck of a story to pass on over the generations.
Welcome, Brenna!