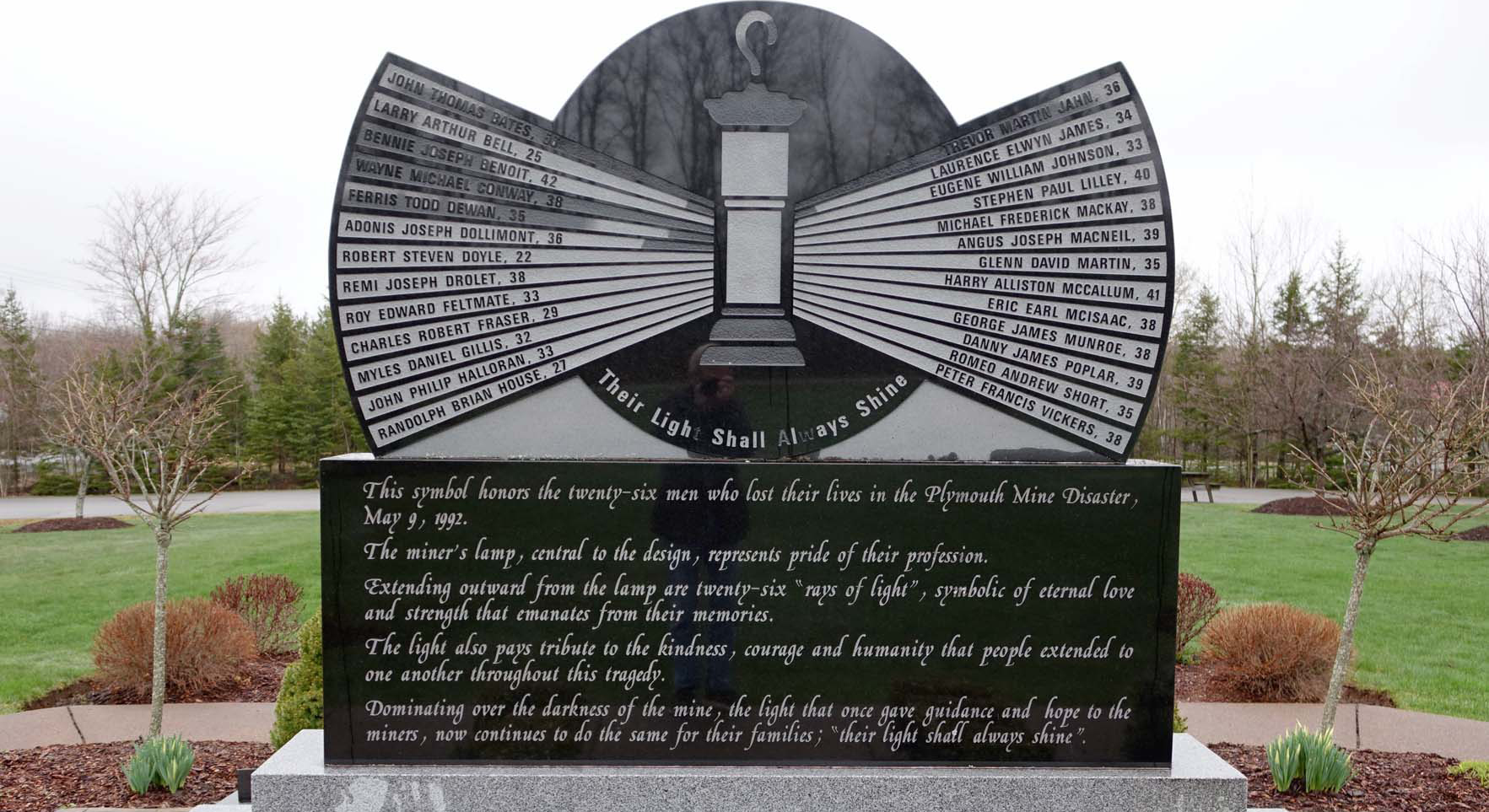 “Their Light Shall Always Shine Memorial Park” in New Glasgow includes eight interpretive panels explaining the Westray disaster and its fallout; 26 flowering crab apple and red maple trees, and this monument, on which is written: This symbol honours the twenty-six men who lost their lives in the Plymouth Mine Disaster, May 9, 1992. The miner’s lamp, central to the design, represents pride of their profession. Extending outward from the lamp are 26 “rays of light,” symbolic of eternal love and strength that emanates from their memories. The light also pays tribute to the kindness, courage, and humanity that people extended to one another throughout this tragedy. Dominating over the darkness of the mine, the light that once gave guidance and hope to the miners, now continues to do the same for their families; “their light shall always shine.”

-by Bill Dunphy
It was around 7:00 a.m. when my phone rang on a grey Saturday morning, May 9th, 1992.
I was in my second year as a reporter here at The Inverness Oran, where Rankin MacDonald, Frank Macdonald, and I were a three-man show with me writing mostly about sports.

But this particular morning it was Rankin on the phone, telling me there was an explosion at the Westray mine in Plymouth and that Angus MacNeil, an Inverness County miner, was one of the men working that shift. Would I go?
Most reporters, at least from my perspective, do not like these assignments. Contrary to the opinion of some, we do not like intruding on the lives of people suffering the sudden loss of their loved ones.
As I wrote in my column back then, “The Oran’s decision to go to Plymouth was based on hope and was not made in order to sensationalize a horrible tragedy. It was made in the hope that Angus was alive, that he and the others would be walking out of the mine and that the happy moment would be caught on film.”
Sadly, that never happened, but news is news, regardless of whether it’s good or bad, and away I went.
Upon arrival, the grey, wet day matched the somber mood of everyone gathered at the local community centre. It was there that I was able to confirm that Angus MacNeil, formerly of Mabou and living in Strathlorne with his wife Marguerite and children, was on that fateful shift.
During the next 24 hours, as family members and reporters from across the country kept vigil, operations director Colin Benner became the face of the company, keeping us informed on the rescue attempts.
Mine rescue specialists, known as draegermen, came from everywhere, including Inverness, and were already on the scene.
Campbell Deagle, a former Westray employee, and his brother Raymond – both certified draegermen – immediately headed to Plymouth.
By Sunday afternoon, officials from Curragh Resources Ltd. announced that 11 bodies had been recovered from the southwest section of the mine.
In the days to come, the bodies of four other miners were recovered.
Father Reg Currie, who was the Mabou parish priest at the time, said, “I guess my sense of the thing is the whole community has been shaken by the accident...the tragedy. All of us are clinging to the hope that Angus, and the others, will survive. It’s our mining background that makes us one with Plymouth. I have visited Angus’ family and they are handling it well. They are a family of great faith.”
But on May 15th, six days after the explosion with the draegermen working in conditions described as “terrifying,” the search efforts were called off with no hope of finding any survivors. The bodies of 11 miners were never found.
At the time, Campbell Deagle said the conditions at Westray were “questionable.”
“The history of that mine kept ringing in your ears. I’m not experienced enough to pass judgment, but based on the training I got at Evans Coal Mine, I wouldn’t work at that mine again.”
Glen Poirier, who worked four months at Westray before packing it in, said, “It’s too bad the economy is such that young guys like me have to work at a place like that. For me, I’m looking for a new line of work – something safer.”
As it turned out, both men were right to have misgivings about the Westray mine.
On the same day that Westray suspended recovery efforts, the provincial government appointed Nova Scotia Supreme Court Justice K. Peter Richard to conduct a public inquiry into the disaster. But due to legal challenges, and concerns the inquiry could impede a criminal investigation, the inquiry did not hold public hearings until November, 1995.
It wouldn’t be until 1997 that Justice Richard would release the report. It was a scathing indictment of the actions, or lack of action, of Westray managers, provincial bureaucrats, and politicians. Richard concluded that “(Westray) is a story of incompetence, of mismanagement, of bureaucratic bungling, of deceit, of ruthlessness, of cover-up, of apathy, of expediency, and of cynical indifference.”
As for the criminal negligence charges, no one was ever convicted for the explosion at Westray. Mine managers were charged with criminal negligence, but the Crown stayed the charges. Toronto-based Curragh Resources Inc., the private company that managed the mine, was charged with operating an unsafe mine, but those charges were dropped.
The families of the 26 men who died launched a lawsuit against the province; however the Supreme Court of Nova Scotia ruled the government was protected from lawsuits under the Workers Compensation Act, and the claim was dismissed.
The families did receive insurance payments, as well as payments from a $1.8 million dollar fund raised from private donations from across Canada. The fund also provided scholarship funds for the 43 children who were left without fathers.
All of Justice Richard’s 74 recommendations were accepted by the province.
And in 2002, following lobbying efforts by unions and the Westray Families Group, the federal government introduced Bill C-45.
The “Westray Bill” established a legal duty for all persons who “direct the work of others” to take reasonable steps to ensure the safety of workers and the public. It introduced new sections in the Criminal Code of Canada so that corporations and their representatives can be charged criminally if they fail to do so.
Shortly after the tragedy, volunteers, tradespeople, and family members built a memorial to the men who died, just outside an industrial park in New Glasgow. The site sits above what was the North Mains tunnel of the Westray mine, the final resting place for the 11 miners whose bodies were never recovered.
The names of all 26 miners are inscribed in rays of light from a coal miner’s lamp. Underneath their names the inscription reads “Their light shall always shine.”