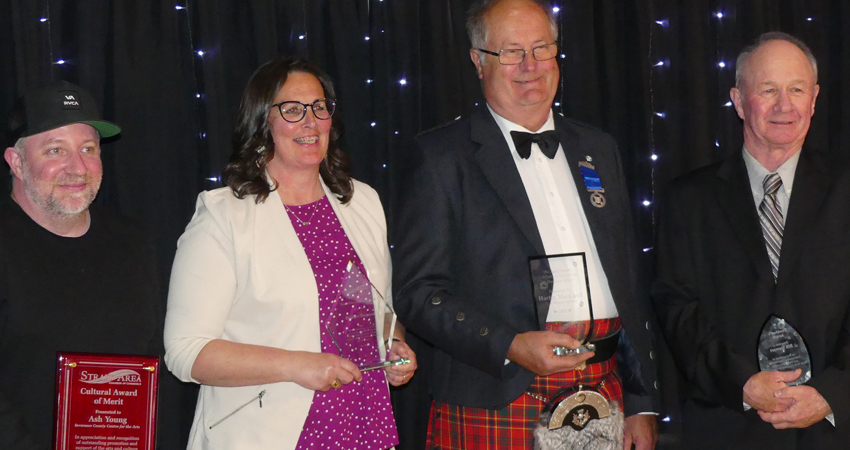 Accepting their awards from the Strait Area Chamber of Commerce were Ash Young, Heather Brennan, Harley MacCaull, and Bill Stewart at the dinner gala, on Wednesday night of last week, at the Civic Centre in Port Hawkesbury.

-by Brad Chandler
The Strait Area Chamber of Commerce celebrated their Spring AGM Dinner and Awards Gala last Wednesday night at the Port Hawkesbury Civic Center.
The event is held annually to recognize and celebrate business accomplishments and success across the Strait Area. The highlight of the evening was the presentation of the Jack Hartery Memorial Lifetime Achievement in Business Award, which was won by Harley MacCaull of A.A. Munro Insurance.

This award is presented annually and is the highest honour awarded by the Strait Area Chamber of Commerce. Recipients are individuals with a long record of continuous business operations in the Strait Area for at least 20 years who have demonstrated a history of success in their business, as well as those who have a reputation of being good employers and community champions.
MacCaull was awarded for his work as chief financial officer for A.A. Munro Insurance where he has worked since 1984.
On Wednesday night, MacCaull was introduced by Strait Area Chamber President John Ouellette, who presented a short video highlighting MacCaull’s long tenured success within his role at A.A Munro.
MacCaull, who is the son-in-law to the late founder of A.A Munro Insurance, Andrew Alcorn Munro, spoke highly of his father-in-law during his acceptance speech.
“This award demonstrates the core values that we as a business have used across all communities,” he said. “I’d like to thank Alcorn for establishing important values in this business and highlighting the purpose of personal integrity.”
The AGM Presidents recognizes an individual or organization that has demonstrated outstanding commitment to the Chamber of Commerce and to their business or community. This year’s award recipient was Bill Stewart.
He was introduced by past Chamber President Dean Hart who highlighted Stewart’s work ethic, adding that the one word that describes him the best would be reliable. “His inability to say no made him a great leader,” Hart said. Mulgrave’s Heather Brennan was this year’s recipient of the Heart of the Community Award, which recognizes an individual who has made an outstanding contribution to the inception and/or growth of community opportunities in the field of recreation, leisure, business, and or health.
The Chamber recognized Brennan for her ongoing commitment to the town of Mulgrave through her volunteer work that makes the region a “better place to live, work and invest.”
Brennan was introduced by Strait Area Chamber Executive Director Misty MacDonald.
She said that “the common answer to what makes the community better is Heather Brennan…she values bringing people together and really is the heartbeat of her town.”
The Cultural Award of Merit was awarded to Ash Young of the Inverness County Centre for the Arts. This award is presented each year to recognize a business or employee who has enhanced awareness within the community of culture, visual, performing or literary arts, directly contributing to the Creative Economy of the region.
101.5’s Scott Oakley introduced Young and outlined his wide range of volunteering and community involvement. The Chamber thanked Ash for “doing new and wonderful things in Inverness County” and promoting the values in which the award symbolizes.
The NSCC Student Leadership award went to Boyd MacIntyre, a second year Marine Engineering student for being dedicated to his school and passionate about his community.