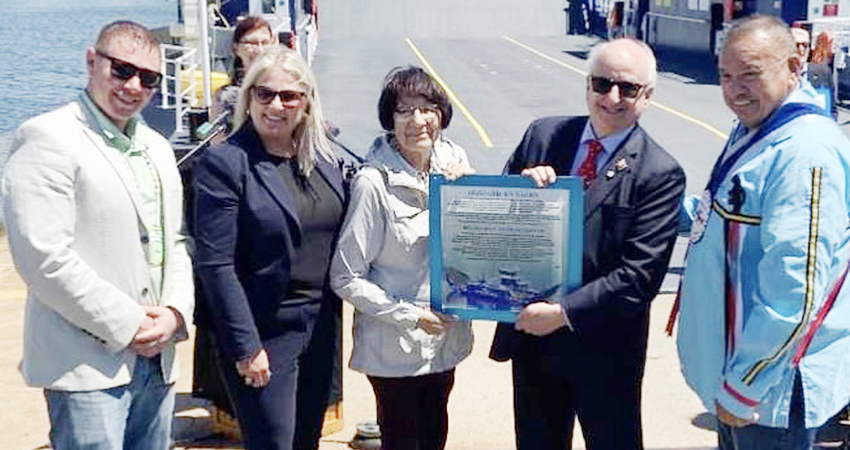 -by Brad Chandler
Local political leaders, friends, family, community members, and extended guests gathered along the shoreline of Little Narrows Monday afternoon to officially launch the brand new ferry named after the late Mi’kmaq Grand Chief Ben Sylliboy.
The lieutenant governor of Nova Scotia and officials from the Department of Public Works were on hand at the week’s event to honour the man who was known to be a well-respected leader to the Mi’kmaq people and a friend to anyone who knew him.
The late Grand Chief Sylliboy, a residential school survivor, promoted Mi’kmaq language, culture in spirituality, and played an important role in advance and reconciliation.
The Department of Public Works held a contest earlier this year involving the We’koqma’q Mi’kmaw School in Whycocomagh and the Rankin School of the Narrows in Iona to name the new Little Narrows ferry.
A grade eight student from the We’koqma'q Mi’kmaq School, August Francis, won the contest when he submitted the successful name change to be in honour of a “steadfast, compassionate leader of the Mi’kmaq Nation.”
The Grand Chief Ben Sylliboy will replace the Caolas Silis, a 12-car cable ferry that operated in Little Narrows for the past 32 years.
During Monday’s ceremony, the Honourable Arthur J. Leblanc, lieutenant governor of Nova Scotia spoke of Grand Chief Sylliboy’s strong advocacy for the Mi’kmaq people, which was recognized throughout Nova Scotia.
“His involvement with the Truth and Reconciliation Commission and the National Aboriginal organizations promoted the recognition and implementation of aboriginal and treaty rights within the country. Above all, Grand Chief Sylliboy had a gift for building connections between individuals and it is indeed more than fitting that we are honouring his legacy with a ferry that connects two communities in Cape Breton,” he said.
Grand Chief Sylliboy was first selected as “Keptin,” a life-long position of great honour often referred to as a hereditary or life chief in other parts of Canada, by his community in 1968. He was given this honour due to his continued engagement with the community of We’koqmaq and his willingness to always help out community members and the church.
He was first elected as an Indian Act band councillor in 1970, before 1992 when the Putus of the Grand Council Charlie Herney informed him that then Grand Chief Donald Marshall, who was very ill had asked that Ben take on the role. He was later named grand chief.
Grand Chief Sylliboy passed away in 2017 at the age 76.
“I am so incredibly honoured to have this new ferry named after a remarkable person like Grand Chief Sylliboy,” said Public Works Minister Kim Masland. “Naming this ferry after Grand Chief Sylliboy is just one way to honour his legacy, his kindness, his leadership, and his love of his community. He will always be remembered. It is my hope that the new ferry provides a safe service for many years to come.”