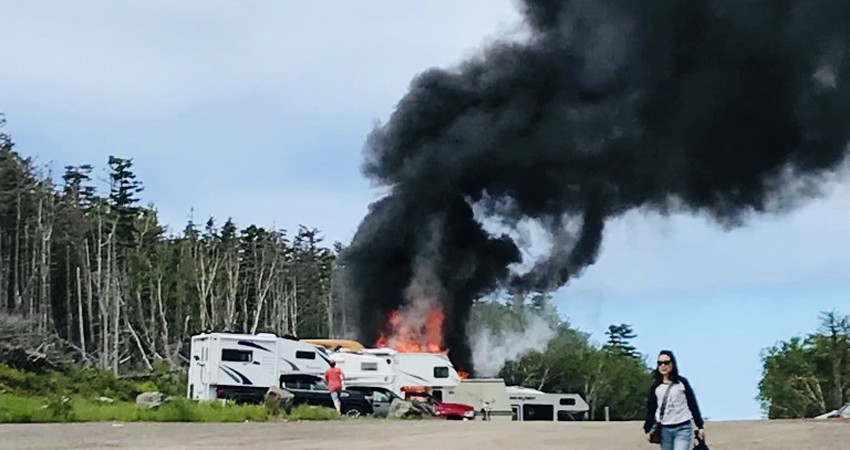 -by Brad Chandler
A Thursday afternoon RV fire at the Cape Breton Highlands National Park Skyline trail is luckily being labelled “a close call” despite the damage it left in its wake.
Occurring in the parking lot located at the trail’s entrance, flames were first seen under the hood of a parked, older-styled RV trailer, which was situated between two adjacent vehicles.
The flames spread to the rest of the vehicle, before it became totally engulfed after a set of propane tanks combusted in the rear end of the RV.
The explosions were reported to have been heard from a distance away and resulted in the flames spreading to the vehicles sitting parallel to the RV.
By the time an onlooker was able to retrieve a fire extinguisher, the inferno had grown beyond the point that any individual would be able to contain it without proper fire fighting equipment.
They told The Oran that before any explosions occurred, all pedestrians in the vicinity were evacuated and remained a safe distance from any potential danger.
However, as fire began to burn the vehicles situated next to the RV, it also began to ignite the wooded area located behind it.
“It started to [spread to the woods] but luckily the wind was blowing north ways directly away from them. There was some brush that started to catch fire but luckily by this point the firefighters had arrived from Cheticamp. It could have been a very dangerous situation that could have started a forest fire or could have cut off the access for the folks that were trapped in there with their vehicles,” the witness said Monday.
The owner of the RV was luckily at the scene in time to rescue her two pets, which were still inside the vehicle.
They escaped unharmed.
By the time the fire was put out, the RV and two other vehicles had been burned completely to the ground. One other vehicle adjacent to the RV had received extensive damage as well.
Onlookers are applauding the efforts of the Cheticamp Volunteer Fire Department on their quick and effective response to Thursday’s incident.
There were no injuries resulting from the blaze.