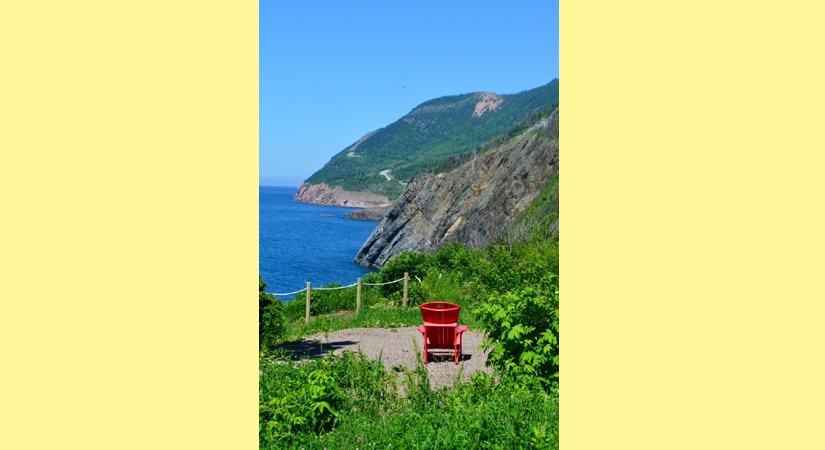 Mkwesaqtuk/Cap-Rouge Campground is Cape Breton Highlands National Park’s newest and greenest campground. It is an ode to Acadian heritage.

-by Brad Chandler
The Canadian Government has formally announced Cape Breton Highland National Park’s newest visitor offer through a seven million dollar investment in the opening of the Mkwesaqtuk/Cap-Rouge Campground.
The project was funded through the Federal Infrastructure Investment Program, offering a brand new coastal camping experience along the world famous Cabot Trail.
The campground will be open to campers in time for this summer’s camping season and is said to have a private, backcountry feel, with stunning ocean vistas and views of the highlands and cliffs of the Cabot Trail.
Mkwesaqtuk/Cap-Rouge Campground offers 47 walk-in sites, including five oTENTiks and six accessible campsites, with treed nooks to create a feeling of remoteness and privacy, with the convenience of front-country camping.
A community celebration was held this past weekend by Parks Canada and partners from La Société Saint-Pierre and the Parks Canada-Unama’ki Advisory Committee to mark the occasion.
President of La Société Saint-Pierre Napoléon Chiasson spoke at this past week’s event and highlighted the important historical significance this new project has for the Acadien people in Cap Rouge.
“This beautiful campground, the preservation of the old foundations, the construction of the interpretive building, all this will allow the community to tell, to interpret and to highlight our history for future generations,” he said.
The Mkwesaqtuk/Cap-Rouge Campground honours Indigenous connections to the Cap Rouge region and commemorates the Acadian peoples whose lands were expropriated for the creation of the national park in 1936.
“We are happy that this troubled part of our story is being told and will be remembered forever. This beautiful place was the home of many of our Acadian families, who were part of a vibrant community, and we are proud to pay tribute to them today at this official opening,” Chiasson said.
The campground will provide visitors the opportunity to learn about Indigenous connections to the region, providing interpretation panels in Mi’kmaw, French, and English.
Mkwesaqtuk is a Mi’kmaq word that describes a place or feature that distinctly changes to red. This Mi’kmaq expression would have been used to describe the coastal area that Acadians later called Cap-Rouge, on the western side of Cape Breton Highlands National Park.
Kelly Deveaux of Parks Canada named the families that had been expropriated from the area during last week’s event.
The names of the Acadian families who once called the land of Cap Rouge home were Aucoin, Bourgeois, Broussard, Camus, Chiasson, Cormier, Deveaux, LaPierre, LeBlanc, LeLièvre, Muise, Odo, Poirier, Romard, Roach, and Stokes.