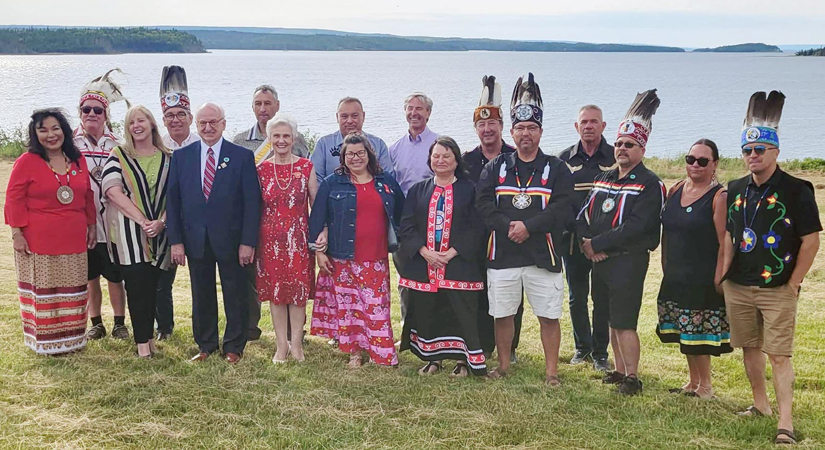 -by April MacDonald
It will ensure that the Mi’kmaw language thrives and flourishes for future generations.
History was made on July 17th when the Nova Scotia Government officially recognized and proclaimed Mi’kmaw to be the first original language of this province.
Lt.-Gov. Arthur J. LeBlanc, Premier Tim Houston, L’nu Affairs Minister Karla MacFarlane and chiefs from the 13 Mi’kmaw communities gathered in a ceremony that officially proclaimed the Mi’kmaw Language Act.

The ceremony took place at the Potlotek Community Hall, St. Peter’s.
Attending the event was Chief Annie Bernard-Daisley and Band Councillor Jason Bernard. Councillor Bernard said that he was there as a MK [Mi’kmaw] board member who serves on behalf of We'koqma'q. He said it was history in the making.
“To be officially recognized by Nova Scotia as the first original language is so monumental for the Mi’kmaw of Nova Scotia,” said Bernard on Monday morning.
Legislation to recognize Mi’kmaw as Nova Scotia’s first language was proclaimed by the province and affirmed by the Mi’kmaq during the ceremony in Potlotek First Nation in Richmond County.
Mi’kmaw chiefs signed a resolution to affirm and uphold the provincial legislation on behalf of their communities.
“Today was an opportunity to gather in community and celebrate the partnership with Mi’kmaq who co-developed this legislation,” said Premier Tim Houston.
“This proclamation is another key milestone as we move forward on the path toward reconciliation,” he added.
“Today is a celebratory occasion, made all the more meaningful by the ongoing tradition of the Mi’kmaw Summer Games. I am continually inspired by the sense of pride that exists in Mi’kmaw communities. All Nova Scotians benefit from the promotion and preservation of the Mi’kmaw language and all that it contributes to our cultural identity,” said Arthur J. LeBlanc, Lieutenant-Governor of Nova Scotia.
Councillor Bernard told The Oran he wanted to acknowledge all the people who made the day possible including Executive Director Blaire Gould of MK and Chair Saqmaw Leroy Denny.
“It’s one of the many ways the Mi’kmaw Nation and the province can improve relationships with one another. It is setting such as huge precedent for other provinces across Canada,” said Bernard.
“Truth and reconciliation is a very long process and will not happen soon but can be a start with such historical events as yesterday,” he explained.
Bernard said he was proud and honoured to be part of something so historical and monumental for the Mi’kmaw and the Government of Nova Scotia. “I believe this is only the second province to do a language legislation of this type,” he added.
He said that he feels that the Province of Nova Scotia and the Mi’kmaw in the province have the potential to do amazing things in order to improve relations and build something unique and prosperous with the two governments along with the federal government.
“I was proud and honoured to witness such a great event and be there with my sister, Chief Annie Bernard-Daisley, who signed the important piece of legislation,” said Councillor Bernard.
“My late father, Alan Bernard, who was a true pioneer of education was definitely smiling from above and there in spirit,” he closed.
The Mi’kmaw Language Act will take effect on October 1st, Treaty Day, and will support efforts to protect and revitalize the language. The legislation was passed by the legislature in April.
“As the grand chief of our Mi’kmaw Nation, I always stress the importance of our language because all of our history, teachings and cultural identity is held there. The governments of the past attacked us through our language when our children were punished for speaking it, but despite all of the efforts to destroy it, our language is still here and we are still here, and that shows our resilience as a people. Since the release of the Truth and Reconciliation report and the Calls to Action, I am pleased that we have begun to work collaboratively with the government to ensure that our language thrives and flourishes for our future generations.” - Norman Sylliboy, grand chief of the Mi’kmaq Grand Council.
“I'm pleased we can be together here during the Mi’kmaw Summer Games, a celebration of culture and strength of community through sport. Mi’kmaw language is an essential part of cultural identity and celebrating the Mi’kmaw language here today is a great way to proclaim the Mi’kmaw Language Act.” - Karla MacFarlane, Minister of L’nu Affairs
Quick facts:
– The Mi’kmaw Language Act supports Nova Scotia’s collaboration with the Mi’kmaq to respond to the National Inquiry into Missing and Murdered Indigenous Women and Girls Calls for Justice, to ensure meaningful access to Indigenous language, culture, and identity as a foundation for resilience and safety.
– The legislation reinforces the importance of the Truth and Reconciliation Commission’s Calls to Action for governments to preserve, promote, revitalize, and protect Aboriginal languages through legislation and education.
– The Nova Scotia Mi’kmaw Summer Games are being held in Potlotek until July 24th.