Rally held in Whycocomagh in support of park workers 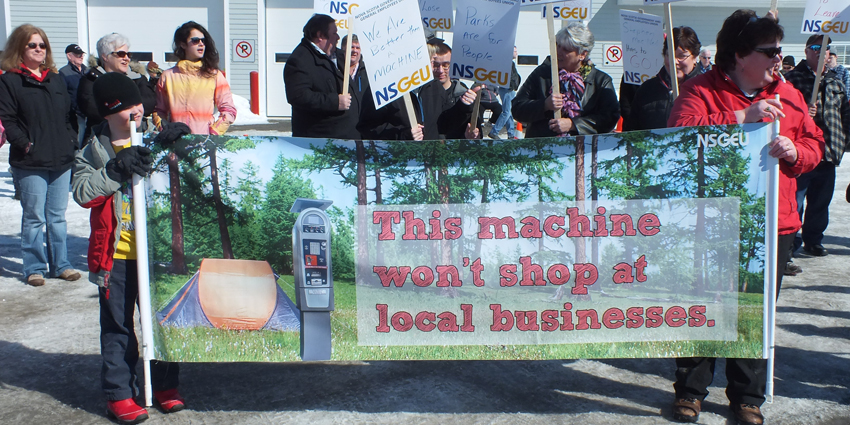 A rally in support of provincial park and Visitor Information Centre workers drew a crowd of some 100 or so people on Saturday morning in Whycocomagh.

The provincial government recently announced cuts to 58 provincial park and Visitor Information Centre staff in seven parks throughout the province. These cuts include the elimination of seven of 11 staff at Whycocomagh Provincial Park. The McNeil government has said it plans to replace park staff with so-called “self-service machines”.

Nova Scotia Government Employee Union president Joan Jessome was in attendance and spoke to supporters and workers at the rally held at the Whycocomagh Fire Hall on the Trans Canada Highway.

Jessome thanked everyone who came out to show support for the park and visitor workers.

“A park cannot survive when you take away 65 per cent of its staff,” said Jessome.

Jessome also noted that the season has been shortened on each end for the busy Visitor Information Centre at the Canso Causeway.

Protestors rallied with a cry of “save our communities, save our parks!”

One speaker noted that Macleans magazine just voted Cape Breton Island the third best island in the world. People noted that a kiosk machine does not make a great impression on tourists and some wondered if this might be the beginning of the end for the local park.

Another speaker noted that one rally will not solve this problem and called for people to write letters, sign petitions, call their MLAs and write letters to the editors of newspapers.

“Governments can change their minds but we have to convince them to do so,” he said.

Inverness MLA Allan MacMaster said he is also concerned with the closure of the camp in Orangedale, an earlier decision and cut made by the McNeil government.

“These are concerns I will be taking to the legislature,” said MacMaster. “I’ve met with workers here at the park and these workers have some great ideas to increase revenues at the park so I hope our government will be listening to them,” he added.

Jim Austin spoke on behalf of the Whycocomagh Development Association and said the community won’t stop until it gets a meeting with the Minister of Natural Resources, Zach Churchill. Austin invited MLA MacMaster to attend that meeting as well.

Others noted that the park offers camping facilities which are becoming harder to find in this area.

Randy Pointkoski of Christmas Island spoke as a representative of 11 community organizations that have come together throughout Cape Breton Island to improve visitor experience.  Pointkoski told The Oran that these cuts undo so much of the effort these community groups have made.

“Cuts to park staff will have an impact on the quality of the park experience for visitors. Staff do much more than tender admission to the park. They help visitors pick campsites, introduce them to the area, ensure visitors adhere to park rules, among other things. Cuts to park staff will also hurt the local economy as residents rely on these seasonal jobs to support their families and stay living in the Whycocomagh area,” the NSGEU noted in a release prior to the rally.

NSGEU president Jessome says this is only the first of many more rallies planned to try to convince the Nova Scotia Liberal government to reverse these cuts.