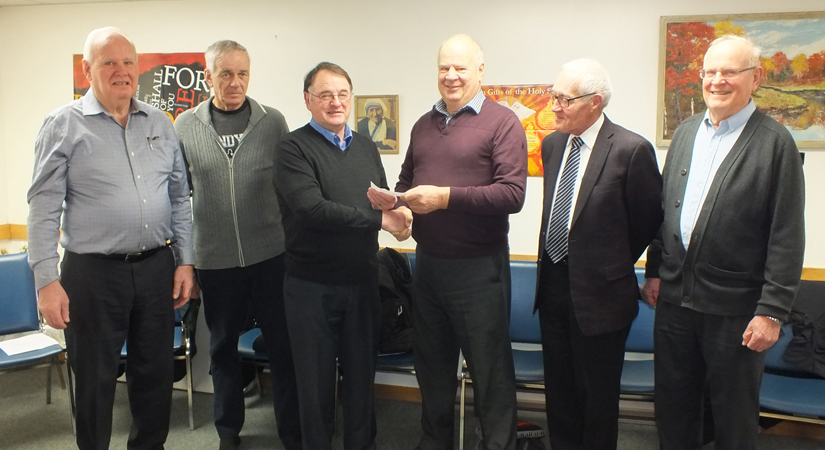 There was a welcome addition on the agenda of the Lifeline Syria Cape Breton Inverness County Chapter meeting on Sunday, January 3rd in Port Hood.

A transfer into the account of Lifeline Syria Cape Breton Inverness County Chapter was made for a total of $13,098.48, money that will go a long way towards resettling Syrian refugee families here in Inverness County.

Gillies made the following statement just prior to the cheque presentation Sunday:

“In the summer of 2000, with the leadership of Ted and Hermina van Zutphen, a small group of individuals from central and southern Inverness County came together to discuss and educate themselves as to what they might do to lessen the suffering of refugees in different parts of the world.

“The group eventually came to call themselves Inverness County Welcomes. The decision was made to fundraise and sponsor a family. Their initial effort failed when the family did not receive visas to enter Canada. In 2004 efforts were begun to bring to Canada the family of Donald and Christiane Kalley, a refugee family from Sierra Leone fleeing civil war. Individuals and organizations from the County were generous in their support of this initiative. The Kalleys settled into an apartment in Port Hood and spent two years in Nova Scotia before moving to Ontario. Donald took up a position in the head office of the Canadian Hydrographic Service in Burlington, Ontario, and Christiane a position in the nursing field. They currently reside there with their three children. It has been a successful transition to life in Canada for this family.

“In 2011 Inverness County Welcomes next sponsored the family of Joseph and Amel Aldhahab who had fled war torn Iraq and were living as refugees in Syria. Again, Inverness County people were generous with their financial and social support for this family. Joseph and Amel and their three children spent one year living in the community of Port Hood. They then re-located to Toronto where both parents have found employment and the children continue their education. Again, this family has made a successful transition to life in Canada with the help of many people from Inverness County.

“In 2012 the then federal government placed a two year moratorium on bringing certain classes of immigrants into Canada. Also the government cut back a number of Interim Health Services which had previously been available to refugees entering Canada. These changes as well as other factors led the Inverness County Welcomes group to change their focus.

“The group adopted a new name which is Inverness County Cares. Their new focus became the support of St. Charles Lwanga Secondary School and Children’s Centre in Nairobi, Kenya (www.lwangachildren.com). However the group still had a fund with money contributed to Inverness County Welcomes , given with the understanding the monies were to be used to welcome and support immigrants to Inverness County. The intention of the donors has been honoured and the funds set aside until a new group formed to sponsor immigrant families.

Again, just prior to the check presentation, Ted van Zutphen of Inverness County Cares noted that it is not always easy to meet the needs of refugees in Inverness County and he stressed “we have to do it for them, not for us.” He also suggested those volunteering for this work be prepared to face some criticism despite past successes. Ted spoke of the excellent work of treasurer David Chapman of Inverness County Cares. Ted also spoke of the benefits refugee families can bring to Inverness County, Cape Breton and Canada and while we can certainly use new immigrants to boost our declining and aging population, van Zutphen reminded us that these refugee families, like all of us, will be free to move wherever they choose in Canada to make their contributions.