Raising a glass to a dead guy in a bottle 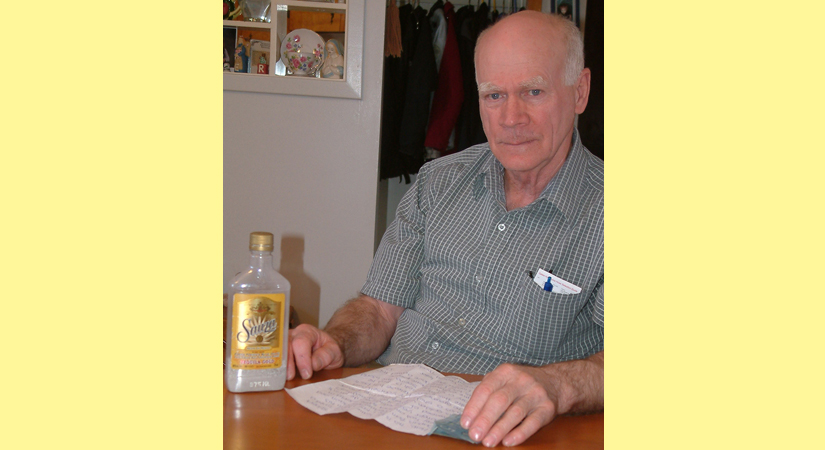 Newly retired, Norman MacDonald of West Mabou has plenty of time to walk the West Mabou Beach, but on Wednesday, April 27th, he found something that would change his life for a while.

He found a tequila bottle with a man’s ashes and a message with it.

"Hello, this is my father Gary Robert Dupuis, born July 1st, 1954. Gary lived a very fast and reckless life in his younger years but slowed down and dreamed of travelling the world in his golden years. His favourite drink was a shot of tequila, straight up, (no groceries). If you find him please take this money, buy yourself and Gary a drink and release him back into the ocean. My wish is that he gets his dream of seeing the world and, finally, some peace. We love you, Dad; have a great trip.

Please write on back of letter where you found him and where you released him. Thank you.” Norman walks the beach and picks up debris and piles it so that it can be hauled away from one of the best beaches in Cape Breton.

He pointed out that the currents in the Gulf bring a lot of debris to the West Mabou Beach and this is the third bottle he has found with a message.

One bottle had a poem, another came from what appears to be a child named Rio who asked the person who found it to write back, but there was no return address.

But none were as poignant as the one found that Wednesday.

There was $25 in the bottle, in five dollar bills, and Norman and his wife, Carol, plan to honour the writer’s request.

They took $5 out which went towards the purchase of a bottle of tequila.

They never drank tequila before and this writer told them that the taste for tequila is an acquired one.

They planned to take it to the square dance in West Mabou on Saturday night and toast Gary Robert Dupuis.

“We went to the media to let whoever sent it know it was found,” he added.

No one seems to know who sent it and maybe it should stay that way.

Norman wrote on the back of the letter where it was found and by whom.

“It was a great first place to land,” Norman said. “Where would he get a better welcome?”

Norman planned to give the bottle with the ashes, letter and $20 to fisherman Trevor MacInnis to drop off the coast, and hopefully one day he’ll hear from someone else who found it.

Dupuis is continuing on his journey and let’s hope he travels the globe.