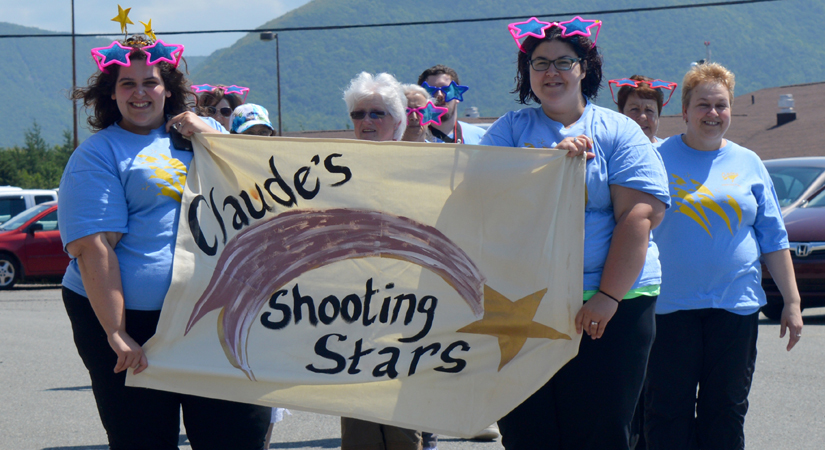 Cancer survivors, their friends and their families have gathered annually in Cheticamp to support each other, to raise money and to give hope to others who are battling this dreadful disease.

In June, the Cape Breton Cancer Patient Fund committee reached out to the communities in Inverness County to participate in the annual walk-a-thon, which took place at a new location in Cheticamp at La Salle des Retraites, behind the church in Cheticamp.

“Many have family or friends that have been through this nightmare of not knowing where or how they will pay for everything,” said the committee in a press release earlier this month.

During the opening ceremony last Sunday, the committee who brings this event to life explained that sometimes embarrassment and pride prevents people from asking for help.

Drugs, numerous trips out of town for treatments and medical items all can take their toll  on the wallet, especially when one has lost their income and ability to work.

That’s why the Cancer Patient Fund exists: to help people in the community afford the necessary means to fight the cancer.

Participants in the event could enter individually or as a team, with there being many returning team members as well as individuals.

The building was full, at time with standing room only, with more chairs having to be added right up until the run commenced.

“One hundred per cent of the money raised goes directly back to the patients and to the people who need it,” said Darlene Boudreau, Cape Breton Cancer Patient Fund Run committee member and person responsible for starting this necessary and valued event in Cheticamp.

“The one thing we are really missing however, is a team from Inverness. There are gaps in the Inverness County area where we would like to find leaders to get a team participate in the event in Cheticamp,” added Boudreau.

She added that the funds raised go to people in every community in Inverness County.

Boudreau said the fund has raised over $100,000 in a five year period.

They meet throughout the year and on the day of event they rely on the incredible volunteers, teams and individual runners, sponsors, and the community to help make the event a success.

All of their efforts are done in order to assist those persons or families who are going through a dark and sometimes very uncertain time.

Prescriptions, costs associated with travel, lack of medical plan, lack of coverage, loss of employment; all these things take their toll.

Last year, the organization raised $25,000 in just two hours. The group also learned that they given $24,600 to people who needed it.

“If we can do a little bit, then we are helping,” said Boudreau.

“All the money goes directly to the patients; this would not happen without the generosity and care of this small community,” added Boudreau.

The Bargain Shop in Cheticamp took the incentive to fundraise themselves by asking their customers to donate $1; they ended up raising $430 for the fund.

The Rainbow Rockstarz Concert also raised money and split the funds raised between Relay for Life and the Cancer Patient Fund.

The nurses at Foyer Pere Fiset have been donating money right off their paychecks for the Patient Fund as well.

The committee said that that was something new and very helpful towards the cause.

“We love him, he is an angel to us as he is to all of the cancer patients,” said Larade.

“He helps financially and emotionally. There are not too many people like him and we are very fortunate to have him here today,” added Larade.

MacNeil lightened mood of the audience by joking that this was his “State of the Union” and said that each year he tries to give a new perspective on the fund.

An example of a direct medical cost would be prescriptions. Examples of non-medical expenses include transportation to treatment, home care and prosthetics. Examples related to daily living are groceries and rents that become financial hardships when there is less money to go around.

“Cancer is stressful. At a minimum, it is disruptive – countless medical appointments, hospitalizations, fatigue, sleeplessness, and certainly much worry,” said MacNeil.

“For many patients – thankfully – they get through this and resume a normal life, although it is never usually the normal they knew,” he added.

MacNeil said the hard part is trying to respond to so many needs.

“Since 2005, the fund has been able to remain financially solvent and keep to its aim of helping people in a timely and non-bureaucratic fashion,” explained MacNeil.

“It is certainly not about getting money because you know someone else who did,” said MacNeil.

He said it is about us pitching in to help a friend, a neighbour, or even a stranger.

“Ultimately, it is about showing people and families experiencing cancer that we care about what is happening to them,” closed MacNeil.