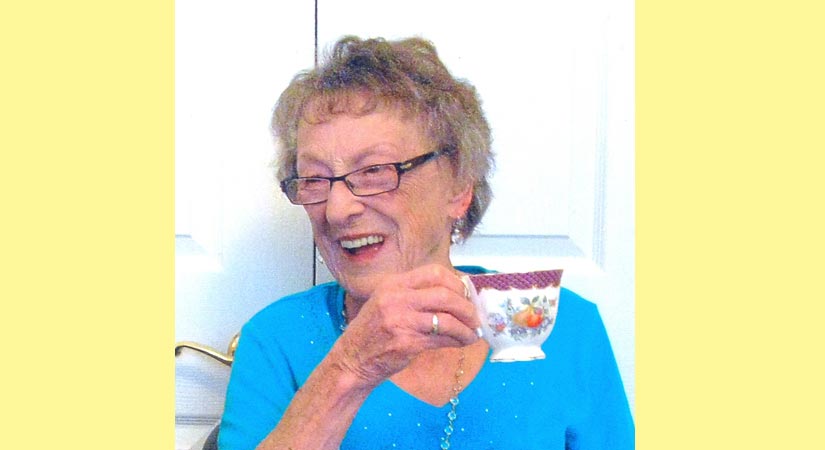 Only the good die young.
Well, there’s little truth to that statement, because on of our best went gracefully into the good night at 101 years on August 18th.
Sally “Central” Beaton passed way at home in Mabou surrounded by the love of her family.
On Easter Sunday, 2016, people gather from across Canada to celebrate Sally’s 100th birthday at the Renewal Centre in Mabou and it was so evident how much she was loved by her family and many, many friends.
And she returned that love from the bottom of her heart, you just had to see her smile.
As The Oran said at that time, Sally was born at Glencoe Station, a place she held close to her heart all her life, and was the daughter of Sandy (The Dancer) MacMillan and Margaret (MacNeil) MacMillan.

Luring Sally from Glencoe Station was Angus (Central) Beaton, which was followed by marriage on June 30th, 1942, and 10 children.
They were known as “Central” to differentiate them from other like-named Beatons in the area. Angus’ mother ran “the Central”, the community’s telephone hub in those long-gone days when people used to actually connect telephone callers.
Angus Central passed away in August of 1991 at 85 years of age.
When Angus’ father died, it was up to his mother, Mary Ann Beaton, to raise the family so she set up the operator’s central in the house that once housed Dr. Alexander Kennedy.
Over looking the harbour, Angus and Sally inherited the farm when Mary Ann passed away and they worked hard, like all their neighbours, to keep body and soul together.
Sally love her home, sitting on the veranda and enjoying nature, enjoying family and friends, and the ingredients, she said, gave her a good, long life.
She and Angus had 10 kids: Margo, Sandra, Allan, Helen Anne, Miriam, Lorraine, Pat (deceased), Mary (died in infancy), Norman, and Kevin (deceased).
When her kids were grown she decided to do something she always wanted to do and that was caring for people through nursing.
So she went to school and became a nurses’ assistant and worked at Mary’s Hill Home, a residence for adults with intellectual disabilities, for 10 years.
She even got her driver’s license at 68, but at 95 felt she should let the younger people do the driving.
On her 100th birthday there were best wishes received from Pope Francis, Prime Minister Justin Trudeau, Queen Elizabeth, Bishop Dunn, Premier Stephen McNeil, MP Rodger Cuzner, MLA Allan MacMaster, Governor General David Johnston, and Lt. Governor General John James Grant.
Sally’s granddaughter, S. Patricia Koning, in honour of Sally’s 100th birthday, published a book to show how deeply the family regards her.
She wrote:
Sally Central - love warm as the wool sweater on her back. Ancient words whispered on her heart. The fiddle and pipes imprinted on her soul. Strength fluid as the waters below kneading bread, hanging clean laundry on the line, held in faithful prayer. Firelight on your face, ice in your glass with rocky shore underfoot. Moments pass like currents in the waters. Walking the old tracks transported back to time of steel and coal. Once a girl clothed in white on the back of a horse. Now a woman clothed in life, honoured by a Queen. Your home above the harbour a touchstone to fate. Memories winding down the lane, across the pond, over the hill, and out to sea. White snowdrops, purple African violets, a red bench, green lily pads, and golden sunflowers paint your home. Vibrant life even and deep loss; indescribable love of wife and mother. China tea cups always full, hot with rich honey. Apple pie warmed and served with vanilla ice cream. The slender wooden rocking chair by the stove, arms won smooth, covered with bright Afghans. Forever in memory your warm hug envelops me. Quick fingers nimbly tucking a coin or two into my palm.
We are all better for Sally being here. Her Obituary said it best:
“Sally touched the lives and hearts of many, enriching their lives and sharing her wisdom, while bringing them joy, laughter, and advice. How does one describe a remarkable life 101 years in a few words? Sally brought inspiration through actions, values, courage, love, and independence. We shall miss her dearly.”
Her funeral was held today.