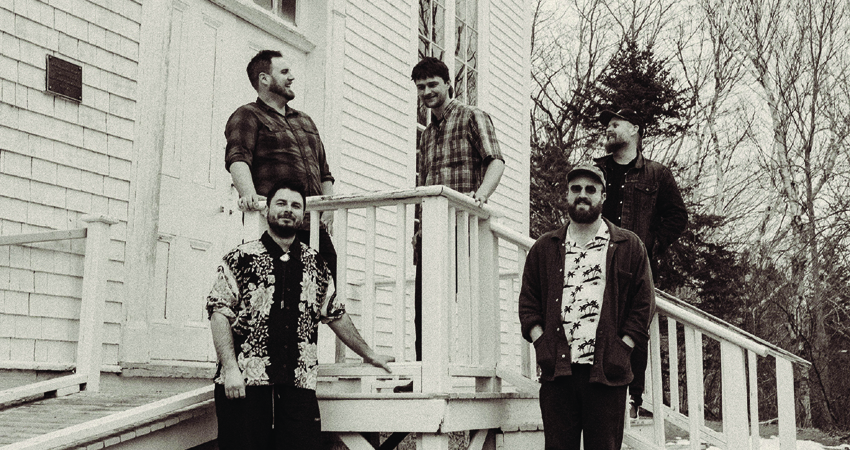 After forming this past fall, Lookout Tower will release their debut album titled Smoke Over Sound on June 4th.

-by Brad Chandler
A brand new local band named Lookout Tower will be releasing their debut independent album on June 4th.
The self proclaimed “winter swamp music” quintet will share a 10-track record titled Smoke Over Sound, which will be available on streaming platforms, compact disc, and soon to be on vinyl.
They will be performing an album release show on June 4th in Baddeck Forks, followed by a second headlined act at the Brook Village hall on June 18th.
The group is composed of singer Rankin MacEachern from Mabou, Bryan Picard from Baddeck Forks, Franzi Habith from East Margaree, Bradley Murphy from East Bay, and John Pinnington from Middle River.
Despite only coming together as a band earlier this fall, the soul and bluegrass inspired group have been making big strides in a short span of time.
“We all started just jamming at first and then things moved pretty rapidly and we started writing our own stuff,” said lead singer Rankin MacEachern in an interview with The Oran. “During COVID, it was hard to book shows and Brian [Picard] mentioned how cool it would be to record an album so we went with it.”
The band worked with SoundPark Studio’s Jamie Foulds to create their debut record in the 167-year-old St. Andrews United Church in Baddeck Forks of all places. MacEachern says they wanted the best raw soundscape they could find to fit the sound they were going for on their albums track listing.
The band released three singles to introduce the album over the last few weeks, with their debut single A Mining Song hitting streaming platforms on May 14th.
The released singles express Lookout Tower’s ambient and spatial recording technique, which is highlighted by Rankin MacEachern’s powerful and rich soaring vocals. Offering strong comparisons to the likes of The Doors and The Tragically Hip.
Throughout Smoke Over Sound, the boys in Lookout Tower offer a wide variety of sounds, with strong blues undertones remaining in the forefront of their released singles and spurts of Celtic inspired instrumentals dabbling in and out over the record’s 10 tracks.
“We are getting really great feedback,” MacEachern said. “It’s a little different growing up on this side of the island because we almost have a Celtic-oriented sound. There’s parts of our songs that pay a little homage to that Cape Breton sound and are a bit of a throwback.”
While the record’s lyrical contents don’t necessarily follow the same concept throughout the tracklisting, MacEachern says many of the songs were inspired by Cape Breton living and stories of the way things used to be on the island.
“[On this album] there is stuff that people can relate to, we have ballads and then we have some rockers and we got a bit of funk,” MacEachern said. “The guys are phenomenal musicians, so it’s been a blast just putting everything together.”
Smoke Over Sound is truly highlighted by the countless hooks sung by MacEachern. Songs like Delta Speedway, Nothing’s Gonna Save Me, and Snow Belt are sure to be stuck in your head for days after listening.
Bryan Picard’s elegant guitar playing adds flavour to the album’s 10 tracks, at times leaning into a southern-styled direction in songs like Look Left and Rabbit Creek, while at other times taking the feel of the record in a more melodic and melancholic direction such as the albums sixth track Peninsula.
It was announced on May 28th that Lookout Tower will be playing at this year’s Blueberry Jam festival in Mabou Ridge on August 20th.
“It’s going to be awesome,” MacEachern said. “It’s not just Celtic music around here anymore, there has been a great influence of rock and roll and blues in our area and this festival pretty much showcases that.”
Smoke Over Sound will be available on all streaming platforms on June 4th.