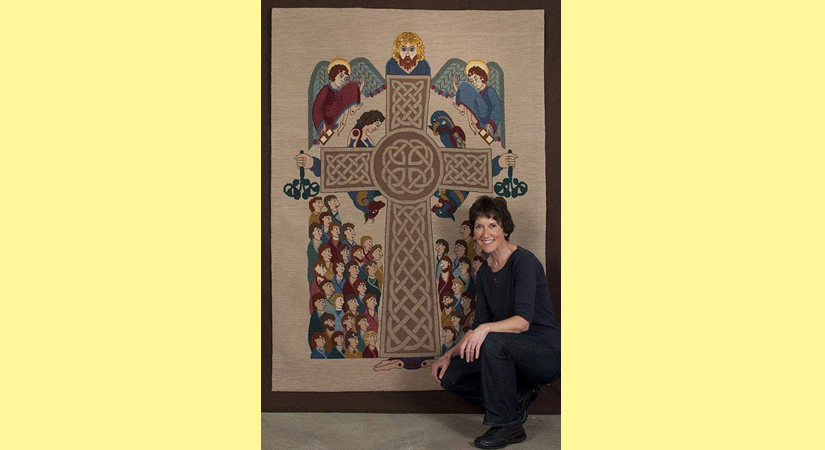 When Cheticamp native Yvette Muise was just six years old, her mother taught her the art of hand-hooking. Muise quickly got the hang of the traditional handicraft, and soon took it in a direction entirely her own.

“Everybody was making flowers and little birds,” she recalls, “so I made this thing – it was a little old lady with a bun on top of her head. And for the bun I pulled the wool through from the back and knotted it, and I gave her a little mop and I did the same thing to the mop.”

Muise brought the piece to the woman who sold her mother’s work. The woman laughed and declined to buy it but offered to hang it in her shop to see if anyone showed interest. “And as soon as the tourist season started,” says Muise, smiling at the memory, “it sold. And so then I started making more odd little things.”

At the age of 56, Muise has now been “hooking” for 50 years, but she continues to bring new life and fresh ideas to an old tradition. After living away for years, she moved home to Cheticamp in November 2009, with hopes of helping to preserve and revive the hooking tradition. “When I came back here, it was just a seed dream.... I was asking myself, What state is the Cheticamp hooked rug in now?...And is anybody going to do anything for it?”

As Muise explains, Cheticamp rug tradition began with rag hooking. Resourceful Acadian women would take worn-out old clothing, cut it into long strips, and hook those fabric strips into rugs. American Lillian Burke is credited with refining the Cheticamp rug tradition and showcasing it to the world, when she began designing rugs made with wool rather than rags and commissioning Cheticamp women to produce them in the 1920s. Burke, who had first come to Cape Breton while working as a tutor for the grandchildren of Alexander Graham Bell, then sold the rugs to an eager American market.

Rug-making became a cottage industry, and an important though not lucrative income source for Cheticamp families. Muise recalls that even the fishermen would be put to work during the long winters, helping their wives hook rugs that sold for a fraction of their worth in labour hours. “When I started,” she says, “I think my mother was getting between $5 and $10 a square foot, depending on how complicated the design was.”

Hand-hooking is a patient, painstaking process, which makes it challenging to sell rugs for a price equal to the hours of work required to produce them. Tiny loops of wool fill the gaps between the warp and weft in a sheet of burlap. Every square inch consists of 144 loops, each carefully drawn through by a steady hand, which must maintain consistent wool tension to avoid disaster. After 50 years of experience, Muise can hook about half a square foot a day: “If I do more, doing it every day with the hook rubbing on my finger, I put a hole through my finger and then I have to take 10 days off.”

When Muise was growing up, young girls learned the craft from their mothers, but that has since changed. Now, she says, there are only a handful of women continuing the tradition. “Women got jobs,” she explains. “It's such tedious work, and they could make a lot more at jobs, and so that's how it faded out. And I have not encountered anyone who has not agreed with me that something has to be done.”

It was an art teacher in Sydney who first taught Muise to think about hooking as more than a practical handicraft. Muise had moved to Sydney in 1983 and begun taking art classes at the community centre. One day she brought her teacher to her apartment to see some of her rugs. “I'll never forget it. She came and she said, ‘What are you talking about? That's not ‘rugs.’ That's your art medium.’”

Attracted to the idea of city life after having spent a little time in Toronto, Muise moved to Montreal in 1988, where she supported herself by selling her work. (“That’s what I was doing, not for a living,” she says wryly, “but an existence.”)

Though she loved the city, she maintained close ties with her family and community back in Cheticamp. “In 1990, it was my mom and dad’s 50th wedding anniversary and I came home. And two days prior, I went for a walk with my mother and she dropped to the ground. She was dead beside me.”

After her mother’s funeral, Muise stayed in town for nine months, taking care of her father, whose own health seemed to deteriorate after losing his wife. “I'm not glad it happened, by any means,” Muise says, “but I'm glad I stayed. My dad and I really bonded in that time.”

She remembers her father going for a walk one day that spring, despite his weakened condition. She watched from the window, growing worried when she couldn’t see him. “And all of a sudden he's coming back and he's got something lemon yellow in his hands...He had been down and picked me the first flowers of spring.” She smiles at the memory. “My father was one of those Acadian fishermen who does not pick flowers for anybody. I dried them. I still have them.”

Returning to Montreal at the end of that summer, Muise continued to build her career, mounting exhibitions in Canada, the United States, and France. The most difficult tapestry she ever hooked, a dizzyingly complex copy of a page from the Book of Kells, was bought by the Bank of Montreal and donated to St. Mary’s University, a momentous achievement that came with a lesson.

At the urging of a friend, she had charged $8,000 for the work, a price she thought at the time was astronomic, despite the fact that the project had taken five months of hard work to complete. After the unveiling in Halifax, the department head who had arranged the sale took her aside. “I'll never forget it. He came up to me and he said, ‘You know what, if you had put a one or even a two in front of that eight, they still would have bought it.’ So he tapped me on the nose and he said, ‘Learn from this.’”

Another career highlight was when the Montreal couple who had purchased her tapestry depicting Chaucer’s Wife of Bath – a beautiful but complicated work that she had torn out multiple times until she got the colours just right – invited her to their home to see it. To her astonishment, she found that on either side of her tapestry hung ballerina portraits done by students of Dégas. “I'm thinking to myself, How could you put my Wife of Bath beside that? That was an amazing experience for me.”

In late 2009, Muise returned to Cheticamp to visit for a couple months. After learning that the house she grew up in was for sale, she bought it and moved in for good, setting up her studio in her childhood bedroom. “That's really when I decided that if I stay I’ve got to do something for Cheticamp hooking.”

Having spent five years discussing the problem with other community members, Muise says it’s still not clear what it will take to put Cheticamp rug-hooking on the map permanently. “Everybody I spoke to was in agreement, oh yes something has got to be done. But that doesn't get anything done.”

Since moving home, Muise has taught hooking at a local art class; offered workshops in Inverness, Sydney, and Montreal; and volunteered to give a wool-dyeing class at the since-closed Artisanale. But she believes it will take a larger, focused effort to tell the story of Cheticamp hooking and its place in the community.

While some of that history is recounted at places like the Trois Pignons museum, Muise explains, “My goal is to explain the story in more detail. The trials and triumphs. I believe to catch attention, we need to have something tangible showing the evolution of the rug. People will have a visceral reaction to pieces that evoke a human touched quality. I also want to show the potential of this craft. It went from warming floors to being recognized as fine art.”

While part of the solution will involve promotion of the tradition and its history, she also believes that hookers need to move that tradition forward, exploring, as her own work does, bolder contemporary designs. “The classic, the original should never be lost. That's the base of it. But people now are more attracted to contemporary design.”

Building a future for Cheticamp hooking will require hard work and some community investment, says Muise. “It takes somebody to lead the way, and I’m ready to do it, but I have to earn a living and I can’t devote a lot of time to it unless I’m compensated...I would need someone who believes in it and is willing to support it.”

If nothing changes, Muise believes the tradition will fade into history, a possibility she doesn’t want to contemplate. “It has meant too much to the community to lose. Like in 20 or 30 years, somebody's going to say, ‘Cheticamp hooked what?’ I can't imagine that.”

Just as it once shaped the identity of an entire community – Acadian mothers guiding their daughters’ hands as they drew their first loops, and women gathering on the lawn to tackle a large hooking project together – hooking has shaped the identity of artists like Muise. “When somebody asks me, ‘Do you think you'll ever quit?’, it's like asking, ‘Do you think you’ll ever cut off your leg?’ Because it's me.”

Those wishing to learn more about Yvette Muise’s work or purchase one of her pieces can reach her at 902-224-2006 or by e-mail at This email address is being protected from spambots. You need JavaScript enabled to view it..