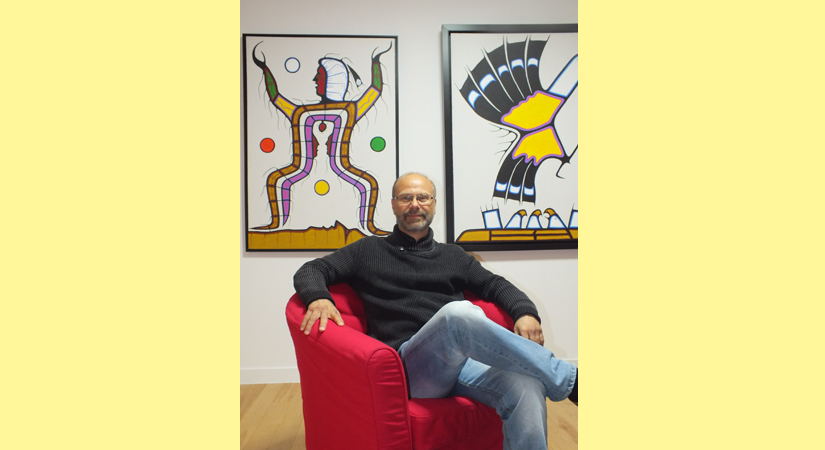 Cape Breton Island is home to a valuable new resource, a new centre constructed for the purpose of honouring First Nations people and celebrating their art, culture and heritage.

The Centre is the creation of entrepreneur Rolf Bouman and is supported entirely from the Bouman Group of companies, which consists of Canadian Pioneer Estates Ltd., Canec Land Developments Inc., Kelly Robertson Consulting Inc. and (Ad)Venture Canada Publishing Inc.

In creating the Centre, Bouman purchased a closed-down fish plant and renovated it into a gorgeous cultural centre to display First Nations art and culture.

Entering the Friends United International Convention Centre is nothing short of a breathtaking experience.  The centre is home to the largest private collection of Native art in Atlantic Canada.

“The First Nations artists are really ambassadors for Canada and they deserve so much more recognition than they have had,” says Bouman, who describes his work collecting and supporting the artists as his passion.

In addition to supporting the artists, the Friends United initiative aims to help Aboriginal artists “become self-sufficient and independent entrepreneurs through their art work.”

According to Bouman, Friends United has several goals.

1) “To provide talented and emerging Aboriginal artists, who might not have experienced yet the degree of recognition and exposure which they deserve, with the business skills, support and encouragement needed to become independent, self-sufficient entrepreneurs who can better provide for their families.”

2) “To eliminate misconceptions and prejudice, and promote equality, peace and mutual respect among all peoples, cultures, genders and races by sharing the spiritual, deeply moving and meaningful stories of First Nation artists as told in their beautiful works of art.”

3) “To assist as Aboriginal people take their long overdue and rightful place as cultural ambassadors for their communities and country who promote a deeper understanding of our shared humanity, our fragile relationships with nature, and our common responsibility to treat each other and our planet with care and respect.”

Bouman has enlisted the help of Aboriginal artist Raven Davis in this work, as well as three ex-Nova Scotia Premiers (Rodney MacDonald, Darrell Dexter and John Hamm) and current Premier Stephen McNeil.  The interest in promoting the First Nations art crosses political party lines and the centre receives no financial assistance from governments.  Other dignitaries, such as former Prime Minister Paul Martin and former Nova Scotia Lt. Governor Myra Freeman, have also shown their enthusiasm and support for the Friends United initiative.

In 2014, the Strait Area Chamber of Commerce honoured Bouman with its Cultural Award of Merit.

Bouman is excited about the possibilities of building bridges between Aboriginal artists in Canada and Europe, particularly in Germany, where he was born and raised before moving permanently to Canada in 1986.

Bouman is also excited about the possibilities of giving greater recognition to the artists whose work he collects and distributes.

At the moment more than sixty works are also on display at the law offices of Evans, MacIsaac and MacMillan in Port Hawkesbury.

“Even with the large area of space to exhibit in the International Convention Centre we cannot display all the work so it’s been wonderful to create these relationships and opportunities to showcase the work here in Port Hawkesbury at Evans, MacIsaac and MacMillan, and in offices in Halifax,” said Bouman.

As knowledge of the collection becomes more known around the world, Bouman fully expects more opportunities for the First Nations artists in the future.

“We provide canvas and paints for many of the artists and purchase the works and the distribution rights. It’s always exciting each month to see what they create and come up with.  Sometimes I come down here to the centre just to look at the work, and even though I’m familiar with these artworks, I am always seeing something new,” Bouman concludes.