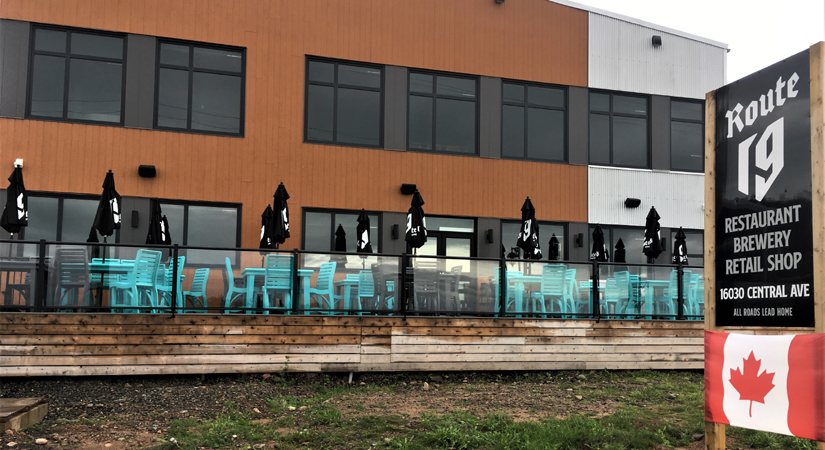 Route 19 Brewery and Restaurant is the latest success story in Inverness.


The president of Route 19 Brewery will be astounded if something from his beer tanks is damaging the Inverness sewage plant.
After Trudy Gillis, county wastewater manager, told Inverness council last week that something in the village sewers is killing the beneficial bacteria in the digester lagoon, rumours took flight, saying that the microbrewery was the culprit.
But Wayne Gillis said waste-handling systems at the brewery and restaurant were designed so that “you could drink what we send out.”
Building inspectors and planners reviewed the fermenting tanks, discharge pumps and holding systems before construction started in 2017, he said Friday.
“That was part of the meetings in Port Hood,” he said, adding that he is not a chemist and so he followed expert advice. “Is it a Route 19 problem? I don’t know. If it is us, I’m sure we will do something about it.”

As back up, Gillis said Tuesday the brewery is reviewing all its procedures.
“We are very confident it is not from the brewery but want to get expert consulting, which will happen this week.”
The brewery sends no mash down the drain, because it is too valuable, Gillis said.
“Farmers come and pick it up every day to give it to their cattle,” he said. “It’s high grade, for better milk.”
“They’re taking it as fast as we can put it out. They’re picking it up themselves.”
“I’ve had so many calls trying to get it.”
Nor is the chemical sanitizer that the brewery uses to disinfect the fermenting tanks likely to be at fault, because the staff uses it in a one per cent dilution, which becomes negligible in a lagoon the size of the one at the Inverness treatment plant, Gillis said.
Yeast is discharged from the fermenters into the sewers, “but yeast is good for you,” he said.
“I don’t know what’s killing that bug they’re talking about.”
County CAO Keith MacDonald confirmed that the rumours are premature and speculative.
“Completely inaccurate,” MacDonald said Friday. “The sampling (of sewer contents below manholes throughout the village) just commenced and the results have not even been completed.”
Gillis said he left a message at the county office on Friday.
“I want Trudy (Gillis, wastewater manager) to come down with her crew and tell me if there’s something they want to look at,” he said. “I’m not hiding nothing.”
He said he also talked earlier to a brewery sanitation expert and was told that he “should go pound sand” rather than worry his business is at fault.
The problem, Gillis believes, is that the aerators in the sewage lagoon have been plugged.
“Until they fix the aerators, you can forget about anything going in that (treatment plant),” he said.
Trudy Gillis reported to council last week that county staff have cleaned, repaired, or replaced several components of the plant during recent months, but unless the county enacts a bylaw to prevent harmful substances from being discharged into sewers, she expects problems to continue.