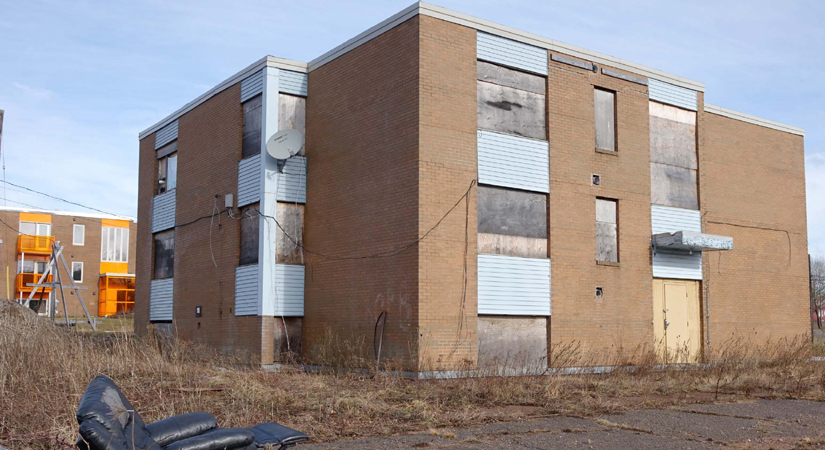 The Breton apartments in Port Hawkesbury were to include affordable housing units when the owners announced major upgrades to the four-building complex in 2016.

Affordable housing is the talk of many municipalities these days, a topic that Port Hawkesbury Town Council is taking seriously.
The town has already undertaken a housing survey and at last Tuesday’s council meeting it heard two presentations from local interest groups.
First up was Célèste Gotell of the Strait-Richmond Housing Coalition.
Gotell said the group’s vision is for inclusive, healthy, affordable, sustainable, and accessible housing to be made available in Strait-Richmond communities; and that its mission is to explore and support the development of housing options.
She said rural communities face unique problems when it comes to housing.
“Homelessness in rural areas is often hidden and shows up as couch surfing, especially among youth. Seniors in rural areas need affordable and assisted/supported housing. Single women and women living in dangerous situations lack housing options. High levels of child and family poverty strongly contribute to the need for more affordable housing.”
As well, Gotell pointed out that there are gaps in the current manner in which affordable housing is made available.
She listed them as: limited affordable housing for all demographics; no emergency housing for youth, men; no second stage housing for women leaving Leeside Transition House; 36 seniors apartments through public housing and 31 family units; limited housing options to address seniors requiring different levels of care; an aging population with only one long-term care facility, Port Hawkesbury Nursing Home with 66 beds; and currently there is no non-profit organization in the Strait Area with a mandate specifically to address housing.”
Gotell said there are ways for municipalities to be pro-active in finding affordable housing solutions.
“Bring awareness to the role that housing plays in creating healthy, prosperous, and safe communities. Learn about and bring attention to the housing needs of your community. Explore options for affordable housing and standards maintenance and enforcement. Consider housing zoning by-laws and tax credits for retrofit and new inclusive housing construction.
“As a council, work in partnership with groups who are advocating on behalf of housing. Participate in a multi-disciplinary working group on housing. Support active citizen engagement on finding housing solutions. And work collaboratively with all levels of government, municipal, provincial, and federal.”
In closing, Gotell said, “I’ve painted a very grim picture, but I’m hopeful.”
Deputy mayor Blaine MacQuarrie thanked Gotell for her presentation and said affordability and accessibility are key concerns.
“People are struggling due to a lack of accessibility,” he said.
Added councillor Jason Aucoin, “Everybody on the housing committee is working hard. We see the seriousness of the need.”
Next up was Damian MacInnis of Colindale Business Solutions, who is promoting a Housing Social Enterprise and seeking support from the local municipalities.
“Our idea is to build multiple rental units across rural Cape Breton dedicated to all levels of need. The initial goal is to ensure low-to mid-level income families have access to new sustainable homes to live in. We also plan to partner with homeowners who want to downsize and rent their homes out at a more affordable rate while subsidizing their rental costs in our rental units.”
MacInnis said, “We’re from here and we want to see the place grow. We have people who are ready to start moving (and) we’re hoping to have something operational by this summer.”
In his presentation, he explained his company’s role in the project.
“Colindale Business Solutions (CBS) will be focussed on being the liaison between the potential tenants and the developers throughout the process and will represent the investors as their local liaison.
“Being a local social enterprise, we are the feet on the ground for every aspect of this development and we will be available for every inquiry.
“We will be offering creative solutions to ensure that living in our region is more affordable and give people more options. As individuals grow older, we want them to have less burden on their physical and mental well-being.
“The main goal of Rural Cape Breton Enterprises is to be a community developer for the rural regions of Cape Breton Island. Beginning with housing will answer an ongoing problem and can help with development in the region.”
“We’re opening the door to council and our door is always open to discuss any sort of partnership,” MacInnis said.
When asked by councillor Aucoin how many of the 50 units being planned for this year would be accessible, MacInnis replied, “100 per cent.”
Deputy mayor MacQuarrie asked him to clarify the role of the community development enterprise. “How does Colindale Business Solutions work with social enterprises?”
“We act as a go-between until it’s sustainable,” he said.
Added MacQuarrie, “Your timeline is aggressive, we wish you the best.”
After the meeting, Mayor Brenda Chisholm-Beaton said she will be looking for an update from Danita Rooyakkers and Attila Tolnai on The Breton apartments.
In 2016, the four-building complex was taken over by the new owners, who are based in Montreal, and a plan to renovate the boarded-up buildings was announced.
Partnering with Housing Nova Scotia, half of the 48 units were to be designated as affordable-housing rentals. Work was completed on two of the buildings and the company is planning to begin renovating the remaining two buildings in May.