Retreat for Veterans with PTSD: Marijuana for Trauma falls for Inverness County 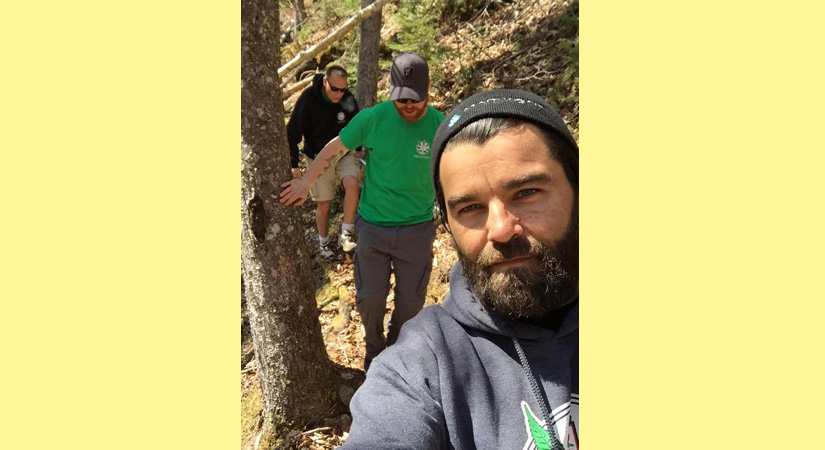 Last month, The Oran learned that the group MFT, or Marijuana for Trauma, was looking into purchasing land around Egypt Falls in Inverness County.

The word was that there was the potential for a retreat for veterans and persons with combat PTSD (post traumatic stress disorder).

On May 13th the co-founder of MFT, Fabian Henry, who is originally from New Waterford, was in the area to hike with two other veterans.

One of those vets was Inverness’ own Carson MacIsaac, who served in Afghanistan.

Henry said that they had an absolute glorious day weather-wise.

“The positive energy there is truly incredible,” said Henry in an interview on Tuesday morning.

“This is the first location for our MFT Retreat, here in Egypt Falls, Cape Breton,” said Henry.

“What a feeling at the base of this waterfall,” he added.

“It was amazing to be there and to walk the property,” said Henry.

When asked how much land was actually purchased, he said that it was approximately 5200 acres.

“We bought from the corner where you turn in all the way to the path,” explained Henry.

It has been a year of remarkable expansion for this grassroots group.

Their main goal is to help and be there for vets and to promote alternative therapies to treat disorders caused by post traumatic stress.

They are heavily based in research and education and remain steadfast in their push for access to medical marijuana for people with trauma, including combat PTSD.

“Plants not pills”, is one of their most popular and profound slogans.

He said that in the army, “you are bred to be an alcoholic or else you won’t fit in, and after that comes the pills”.

Now a retired sergeant and founder of MFT Inc., he said that when he was in the forces he was just so sick of being lied to.

“Cannabis was the enemy; that’s what we were told,” said Henry.

“There are so many better alternatives to alcohol and prescription drugs, if people are looking for help,” said Henry.

MFT offers healing therapies for other injuries and illnesses, support for families, referrals to physicians and countless holistic therapies that seem to be ever-expanding.

He said that MFT was incorporated in 2013 and on March 2nd of 2014 they opened up their first office on Restigouche Road in Oromocto, New Brunswick. Oromocto is the nearest town to the Gagetown military base.

The 5th Canadian Division Support Base (5 CDSB) Gagetown was officially opened in 1958 as a training facility. It has an 1100 square kilometre training area: 1500 km of roads, 900 km of tracks, 740 buildings and some 6000 military and civilian personnel at the main base and lodger units across New Brunswick and PEI. It is is the second largest military base in Canada and the largest military facility in Eastern Canada.

Henry said that he formed the organization MFT after his own struggle to access appropriate medical care after his combat-related injury.

He began by knowing his own struggle, by seeing that there was a serious need, but even more so that there were dire consequences if vets with PTSD were left to suffer in silence

He began a mission to strip away the stereotypes and give a voice to the vets who are struggling.

He said they have strong peer supports and “check-ins” in an effort to try to help vets in their darkest hours.

Henry said that he himself battled depression and suicidal thoughts.

Over the past few years, more and more details have come to light regarding alarming suicide rates in the Canadian Armed Forces.

The Globe and Mail was able to obtain records through the Access to Information Act; they received 162 pages of e-mail communications showing that The Globe’s request was initially sent to 30 military and government e-mail addresses and was processed for nearly two months.

The Globe was able to identify other deaths through poring over more than a decade’s worth of military-related obituaries, and then confirming, in interviews with soldiers’ families and members of the military, that those deaths were in fact suicides.

At some point, a decision was made to keep the suicide tally secret.

In one Afghanistan mission, 158 Canadian soldiers died. But the losses did not end there. That Globe and Mail investigation revealed that at least 54 soldiers and vets killed themselves after they returned from war.

“First and foremost we want to reduce harm,” said Henry.

“On June 6th we’re opening up another location in Montreal; in August we’re opening one in Halifax and in September another one in Edmonton,” said Henry.

CEO Fabian Henry has a social media presence that can’t be ignored; he is featured in numerous news interviews, and is known to make himself accessible to anyone who wishes to reach out.

MFT was recently featured in High Times Magazine in a gripping article entitled "The Green Legion." (Look it up).

Lately, they have also received a glowing endorsement from The Trailer Park Boys.

“I want more people to know about alternatives to prescription drugs,” said Henry.

They aim to change the attitudes about medicinal marijuana, and they are making great strides.

He said that fear of marijuana has been causing harm.

That stigma has been blocking access to medical relief for patients, even in places where medicinal marijuana has been legalized and regulated.

“The MFT multi-faceted therapeutic approach to healing and its focus on supporting access to medical marijuana as a very legitimate and effective medical intervention has played a tremendous role in overcoming that destructive stigma for people across Canada.

“Integrating marijuana therapy and cannabis therapy into a holistic and personalized healing plan is really working to save lives and to support healing right across the country,” said Henry.

He added that they have no time for people who don’t want to, or don’t care to learn about alternative therapies for vets.

“We have no time for the bullshit anymore, people are dying,” added Henry.

With their new MFT Retreat, the future is looking brighter all the time for veterans.

“Within a year we hope to have our first chalet on the land at Egypt Falls,” said Henry.

He said that nature can be the absolute best medicine for anyone suffering from any mental health issues.

“We made a strong connection at Egypt Falls,” explained Henry.

He added, in closing, that when they went on the trek on May 13th, they met a woman who was also hiking the Egypt Falls trail. She had said to them that she had heard that someone had bought the land and that they better not block access to the falls.

To that, Fabian Henry said, “That’s exactly why MFT bought the land.”

So that access never gets blocked from people who need the land, the water and the space for mental, physical and spiritual healing.